While the sight of black bodies on television and movies does not seem remarkable in contemporary society, there was once a time where no blacks were allowed on television. Despite the absence of authentic black bodies, blackness was a consistent presence in past plays, movies and televisions. Blackness was achieved through blackface, or the act of temporarily darkening one’s complexion. Blackface was not only present in the realm of entertainment, but in society as well. In addition to blackface, whites often hosted blackface balls where they dressed up and acted like blacks were believed to act, and dined on food believed to be favored in the black community. Blackface is still seen today on some majority college campuses, mostly seen during but not limited to Halloween. Blackness explores a means of representing blackness without the presence of blackness, further excluding an already excluded faction and subjecting blacks to further ridicule. 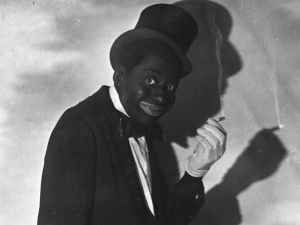 While contemporary society has certainly not shied away from whites in blackface, it has encompassed a new dynamic- blacks in blackface. This dynamic is features in popular culture and colloquial life, in which the peak of blackness is excluded as a continued means to control the level of blackness displayed in mainstream America.

This discussion takes my mind to the heartbreaking choice of Zoe Saldana to portray late legend Nina Simone. Nina Simone was a late musician and activist who experienced adversity for her unconventional look and artistry, in a world and industry that encouraged conformity. Deeply sun kissed and full features, Nina Simone steered away from the fair skinned, delicately featured aesthetic not finding a place for herself, but making one. With an unwavering tenacity and pride in her roots, Simone was more than a musician but a muse for every sun kissed sister who was ever told that she didn’t belong, or that she was destined for mediocrity.

The reality of Nina Simone as an inspiration, makes her ideal for a biopic, her worthiness as a subject should be mirrored in the actress chosen to portray her. While I do not contest Zoe’s blackness, her physical appearance and presence lacks any resemblance to the late Nina Simone.

Simone was a woman who endured much strife in her life because of how she looked. While I do not wish to deny that Saldana has faces issues of her own regarding her color in the Latin community, her looks are far more praised in America that Simone’s ever was or will be. The selection of Saldana for the role reveals a commitment of Hollywood to only include a limited form of blackness.

Aside from not bearing a resemblance to Simone, it also highly problematic that Zoe will don blackface in her portrayal. Blacks in blackface, makes blacks puppeteers rendering ridicule onto their own people. It is through blacks in blackface that whites and non blacks seek alleviation from the social convicts that they create, deflecting it entirely onto the black community.

Blacks who dislike Zoe as Nina are labeled as insecure racists, overlooking the reality that despite black coming in all shapes and sizes, only a small minority of an already minority group are actively pursued as subjects of popular culture. Blacks in blackface further excludes darkly complected women from roles that don’t feature them as maids, slaves, utterly troubled or women of the street.

The hand washing away the clay mask of blackface also being sun-kissed does not soften the blow of ill intentions. Blacks in blackface depict a partial tribute to an often abandoned phenotype in Hollywood, appearing to tackle a significant figure in African and American history but excluding the very demographic in which Simone represented.

Perhaps Simone’s rendition of “ My Baby Just Cares for Me” would be far less significant if her personal struggle were not was it was. The song captures the reassuring sentiment of a lover who has an unwavering desire for chocolate, despite an overwhelming selection of glamorized vanilla. The tune places Simone as more desirable than some of Hollywood’s most iconic beauties like Lana Tuner and Elizabeth Taylor, in the eyes of her beau. The magnitude of Simone’s rendition of this song is obvious to any and every child of color who has diligently searched for herself in mainstream magazines and billboards. The power of this song is known to every girl who seeks to see her shade represented as the lead of a romantic comedy, or a chique and sexy role free from buffoonery and ignorance.

Perhaps one day the writers and producers of Hollywood will encompass the extraordinary vision of Simone’s beau in “ My Baby Just Cares for Me” and truly be able to appreciate the sun kissed end of the black spectrum beyond the singularity of Lupita Nyong’o. So while my post does not aspire to throw shade at Zoe Saldana, to deny the role of shade and color in Hollywood acts as erasure for the already largely unrepresented ebony woman.