Admittedly, when I first heard of How to Get Away With Murder I expected entertainment. While it certainly it keeps me on the edge of my seat, the newest #tgit (Thank God It’s Thursday-ABC) addition does something more.  With its lead Annalise Keating played by Viola Davis and supporting actress Aja Naomi King as Michaela Pratt, How to Get Away with Murder depicts the black female’s battle to fit in. The spring season of How To Get Away With Murder exposed both Annalise and her protege as women who stop at nothing to bear the image of success. 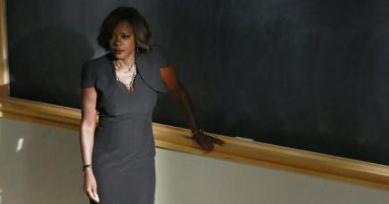 Keating, as stoic as she is successful, exudes a masculinized sexuality. She is sexy because she is educated, successful and powerful, challenging the casual onlooker to see past traditional attributes of attractiveness. However, the show features Keating’s masculinized sexuality in addition to her strides to cultivate the image that she wears for the world.

Wigs, and Name change as The Ways of a Wilted Woman

Keating’s relationship with her wigs depict Keating’s battle to “look the part.” Now, contemporary culture has enlightened the public to the reality that most public figures use artificial hair to achieve the image of perfection. However How To Get Away With Murder’s decision to expose this as Annalise’s reality is more informative than entertaining.

When interviewed about the first time Annalise’s character removed her wig, Davis speaks to wanting to show the layers of her character. But, Davis’ performance does something more. In the casualness of her deed, Davis shows that black women do not in fact “wake up like this” (as proclaimed by songstress Beyoncé).

While I personally feel as if Annalise’s revelation does more harm than good to the already challenged aesthetics of black women, her actions do showcase an important reality of what assimilation means for the black female.

Assimilation is personal modification of physical or mental attributes to blend into the dominant culture. As members of a race and gender believed to be inferior, black women have a unique relationship to assimilation. This battle is particularly daunting for black women who are placed at the bottom of the aesthetic and socioeconomic wavelength. Thus, society beacons a silent request for the black women’s participation in acts of assimilation.

an who lacks racial ambiguity in appearance, Annalise strives to cultivate other signifiers that mirror the dominant race. Her hair, coarse and short is veiled through a wig that is silky and moveable. Her name, reminiscent of the hospitality of the south is replaced by a more elite- sounding choice. The result is a name that sounds more city than country. Annalise is representative of the black girl often central in traditional novels narrating the black experience, authored by celebrated writers like Alice Walker and Toni Morrison. These characters are born beautiful, but are ugly in the eyes of a white dominated society.

Michaela and the Mask of Matrimony and Club Monaco

tly wound protege, paints herself in Annalise’s image by working towards possessing the skill and presence Annalise delivers in her career. In the first installment of the series, we are introduced to Michaela Pratt: the proper, poised, ivy- league educated and soon-to-be wife of what seems to be the next Barack Obama. Placed at the top of her class, Michaela is a shoe in for law school, but the road is not as smooth as anticipated.

Towards the end of the season we learn that Pratt too is presenting a facade. We learn that her proper speech and posh clothing veil the reality of a southern, working class background. Ironically, we gather this information in Pratt’s prenuptial discussion with her future mother in law. When the conversation becomes heated, Pratt raises her h 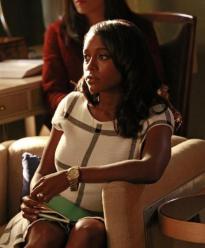 and to meet the face of her future mother in law. In the simple raise of a palm, Pratt unveiled her “poor” upbringing, as the impoverished are traditionally attributed to violence, to the contrary of their wealthier counterparts. Michaela’s efforts in assimilation are to appear in possession of the life she is working towards. Thus, she is dressing for the life she wants, not the life she has.

Michaela’s marital strides represent the traditional bounds of womanhood, where women would marry into the lives that would elevate or main

tain a particular place in society. Michaela’s efforts further in her desire to form a black power couple with prospective husband Aidan Walker. These efforts dwindle in the unwillingness of her partner to love her when she needs him most, and his compartmentalized preference for men.  While Michaela develops more confidence as the series advances, she was originally more than willing to overlook the flaws and sexual preference of her prince in exchange for his role in transforming her image.

Efforts in cultivating image make the relationship between blacks and material is a fickle one. While it is commonly stated that blacks covet white wealth in their acquisition of material, I beg to differ. One, the previous assertion suggests that all whites are wealthy, which is simply untrue. However, blacks read differently than the dominant race. Thus their often subconscious desire for visibility, often boils down to image or attire. Thus, it is not Michaela’s wardrobe acting a means to embody the life she wants that is problematic, but rather her desire to veil her origins. In the efforts to distance themselves from their origins both Michaela and Annalise depict the shame that culture teaches blacks to feel for their humble beginnings.

In closing, Thursday’s latest edition instructs viewers on “how to get away with” much more than murder. This message in assimilation reflects a society that still fails to fully accept black women. This suggests that there is still no place at the top for the black woman who fails to meet the aesthetic or socioeconomic image of those deemed worthy of such a lifestyle. While there is little room for the black woman who fails to meet western beauty and socio-economic status, it seems there is plenty of room for her conformity.