Hopeful that amidst a society that violently works to devalue blacks, I went to see Dope. With Rick Famuyiwa (Brown Sugar, The Wood) as its director and a predominately black cast, Dope seemed to possess the ingredients needed to issue some much needed positive representation.  Perhaps my expectations intensified my eventual disappointment.

Set in Southern California where culture is born but ambition is often short lived, Dope features protagonist Malcolm and his friends as anomalies in an environment saturated and obsessed with “cool.” This infatuation is thwarted by the typical ingredients of black temptation: women, drugs and money. Placing these items in the path of otherwise exceptional youth suggests that all blacks are plagued with an obsession with the white man’s wealth. This obsession not only intertwines the road to Harvard with the road of drugs and money but suggests this road is one in the same.

That problem with this film, is that much like its lead protagonists, it too is obsessed with “cool.” So much so that it belittles hard work and suggests that black mail and the black market are the only means for impoverished black children to escape financial poverty. For the film suggests that the conflicts of the black experience may only be exchanged not escaped.

The element of escape is subtly placed into the story from the very beginning in the revelation of Malcolm’s ambitions to not only leave Inglewood, but leave the west coast all together and attend Harvard University. His attempt to leave his surrounding employ an inability to leave the “hood” and all its demons without the exploitation of these demons in order to move forward. Interestingly, it is  Malcolm’s Harvard interviewer- Austin Jacoby that depicts this element of “exchange only.”

Despite Mr. Jacoby’s Harvard education, he places and distributes drugs to black youth, polluting his very own community with the poison that will leave them stagnant. His Harvard education led him to establish his own check cashing place, a place that enables him to disclose the shady dealings of his side business. This ivy league education has proven solely  beneficial to a white supremacist society in which educated blacks obtain further means to work against themselves.

Perhaps most detrimental, this depiction suggests to little black children that they must be as crooked as the country that oppresses them to make something of themselves. However, as stated by the late and great Dr. Martin Luther King Jr. ” darkness cannot drive out darkness, only light can do that.”

II. A (not so) fatherless child

Employing an all too familiar assumption of black life, Dope’s protagonist Malcolm, is yet another fatherless black male. Ironically, the main character is named Malcolm, reminiscent of iconic civil rights leader Malcolm X. Despite contemporary youth’s deprivation from the direct leadership of men like Malcolm X, his impact, like others of his caliber, is just as powerful in spirit. It is through this spiritual presence of past leaders like Malcolm X, Dr. King, Medgar Evers, and  George and Jonathan Jackson etc, that I can confidently state that no black child is truly fatherless.

Thus, this single parent stigmatism that is all to commonly cast onto black life, is not only overtly offensive in its perpetuation of stereotypes but covertly degrading in silently suggesting that the impact of our leaders dissolved along with their physical presence.

III. Dope and the Slippery Slope

The film employs a term not frequently seen in black films: “slippery slope.” Interestingly the term is treated as a doctrine, implemented to ensure a desired outcome. Specifically the term is used by local drug dealer Dom, who beats up someone for disrespecting him claiming that not doing so would cause others to believe he can be spoken to in any manner.

In actuality, a slippery slope is a logical fallacy in which”… a result is illogically connected to a cause.”  For example: If I give my sister a slice of cake, she’ll exceed the recommended sugar intake for a person her age. She will then develop diabetes and be legless before she turns 40. We see here that I begin with logical circumstances and spiral onto something much less logical.

The idea of manifest destiny suggests that America would expand simply by being America. It is the arrogance of this assertion that resulted in the genocide of the Native Americans, and the eventual kidnaping and enslavement of African people. This fallacy also permits for the economic and societal disenfranchisement of the Dope’s protagonist Malcolm and the community in which he dwells.

Unfortunately, all the film promotes is the slippery slope of systematic racism, suggesting blacks must be crooked to make it. Slippery slopes continue to shape black perception, specifically acting as the reasoning behind black injustice. 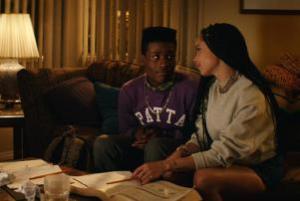 Dope performs in the series of black movies that features a fair skinned leading lady opposite a chocolate male lead. In placing Zoe Kravitz as the romantic interest, Dope silently reinforces that fairer skinned women are the sole object of desire. This depiction played into western ideas of beauty and problematically pokes at the self esteem of the younger brown girls watching this film as brown women are  rendered insignificance in their absence.

Another problem in this film is that it carelessly tosses around the “n” as a desperate attempt to appear urban and relevant. The film wanders into the point of no return as it allows its use by those outside the African Diaspora. There emerges an insignificant debate between white boys overtly lustful over black culture about using the “n” word. The debate ends with one white character getting a free pass on using the term when lead black male, Malcolm encourages its use.

This scene is a problem because it is yet another testament to this film’s attempt to “be cool.” This scene was probably conjured up as an attempt to address white conflict with the “n” word, a concern that I would strongly argue has no place in a film that is supposed to be about black youth.

Malcolm as an anomaly within his neighborhood is a theme that intertwines throughout the movie. However, by the end of the movie as we see him pull a gun on a bully and successfully operate a drug dealing business, it becomes difficult to distinguish Malcolm from his peers. The evolution of Malcolm into someone who sells drugs and blackmails the drug empire is particularly problematic given the state of the black union.

In 2012 we watched as the media tirelessly tried to paint Trayvon Martin as a “thug” to justify his wrongful death at the hands of wannabe cop George Zimmerman. In 2015 we watched as the media attempted to paint the same picture of the late Mike Brown.  Dope implies the very same idea portrayed in the media. If we as blacks allow ourselves to be represented one way in entertainment, we must accept that this is the way we will be readily perceived in reality.

Dope in failing to Render the “high” of Revolution

Perhaps what cultivates the disappointment ultimately experienced at the end of the film, is that Dope pretends to be revolutionary. As the film embarks on its final fifteen minutes, the music nudgingly urges us to become inspired. After hustling his way out of “nerd” status and through a labyrinth of drugs, sex and money, viewers are presented with a changed Malcolm typing his Harvard application letter.

Now, I know that Harvard was inserted into the script as a symbol of Malcolm’s high standards, but this too plays into Western ideals of what it means to be great. I personally see Malcolm’s ambitions or lust towards Harvard, as similar to any black male lust for white women. Contrary to what the masses will have you believe on the matter, this lust isn’t a reflection go high standard or high quality of the white woman, but guised lust for the white man’s power. Both white women and white institutions, are representative of tools in Western society used to indicate status. Thus, Dope fails at the beginning and end, by showing that despite the metamorphosis experienced by Malcolm. that this lust for the white man’s things is unwavering.

So the final line of this movie ” so why do I want to attend Harvard?… if I were white would you even have to ask me this question?”  is underwhelming, despite the accompanying  music to suggest otherwise. This line suggests that the ambitions of white and black youth are different, in light of the film itself projecting the exact opposite ideology.

This fallacious empowerment cued by carefully selected music, allows Dope to perform in a series of contemporary films that resurrect necessary conversations of systematic racism and its familial, financial and social complications, but fail to do anything to advance this conversation. This allows for discussions of race to remain shallow and self serving to the white supremacist society that continues to sail on calm waters as we continue to suffer.