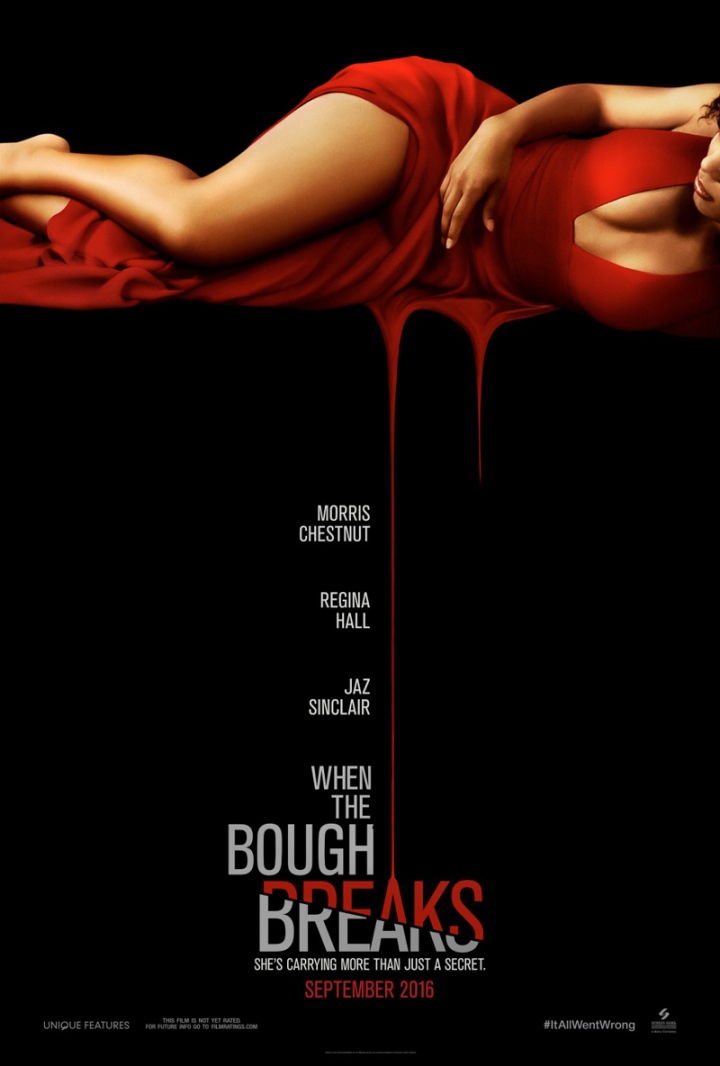 Black Hollywood Veterans Regina Hall and Morris Chestnut appeal to the black audience  lost in the abundant white faces that continue to dominate the big screen. Thus, despite the familiar plot, reminiscent of Fatal Attraction or Obsessed, the film becomes attractive in the still aberrant presence embodied by black actors. Unfortunately, the presumed “black” actors, betray a melanated presence that conveniently presents physical diversity despite portraying a privilege and hue antithetical to their own. The whiteness of the physically black cast surfaces in assigning Hall and Chestnut Anglo names. Regina Hall and Morris Chestnut become John and Laura Taylor, and their surrogate Jaz Sinclair becomes Anna Walsh. Thus, while it is certainly pleasing to see a black couple love one another, this love exists in the face of acquired whiteness that makes their hue a suggestion rather than a defining attribute. Through illustrating whiteness through black bodies, When the Bough Breaks embodies racial subtleties that strategically shifts culture and cultural accountability.

Laura Taylor, the skilled and conventionally successful culinary professional presumably has everything. She has beauty, style, an equally alluring residence, and an admiring husband. However, despite their love for one another, John and Laura cannot conceive a child. It is though her implemented barren state, that Laura Taylor, the black woman, swaps places with her European counterpart. This is not to suggest that black women do not struggle with fertility, but it is to state that it is not a moment issue plaguing our personhood. In fact, this portrayal counters the consistent portrayal of black women as hyper-fertile, an image that perpetuates black women as bearing multiple children even launching the 2011 Soho billboard that asserted the black female womb as the most dangerous place for a black child. More significantly, this perpetuation, when viewed allegorically, depicts Africa as barren and childless, a truth inconsistent with a history that conceals the repeated rape and seizure of people and natural resources from the fruitful land on earth–Affica. Thus, the black woman gains central placement at the expense of sacrificing her frutitful history to one that mirrors one of her oppressor. As a barren woman whose last chance for motherhood lies in a crazed woman, Taylor sacrifices her conjugal sanctity for her child. By the end of the film, it is Laura who shoots the fatal bullet into the body that birthed her legacy. In casting the fatal shot, Laura literally chops the tree that bears her fruit. Here, the black body does what Scandal viewers subconsciously absorb on Thursdays, a black body that exudes behavior historically aligned with whites. Scandal’s Rowan Pope (Joe Morton), is easily the most fascinating character on the series who simultaneously elicit hate and awe . Pope, as “Command” epitomizes power, as no system or individual seems capable to deplete his dominance. Pope breaks men down only to build them up in his image, or discards those unable to live up to his standards. By depicting a black man as powerful, but evil and perniciously dominating, racism takes on an equality as real as the characters themselves.

Similarly, When the Bough Breaks portrays blackness both physically and allegorically to illustrate  a similar reversal. Westerns raped Africa of her natural resources and children to birth the productivity of a stolen land. After providing the blood, sweat and tears necessary to nurture what we now consider America, blacks were emotionally and socially tossed aside to fend for themselves in a sea of disenfranchisement. Anna Walsh allegorically represents this marginalized presence, seemingly driven mad by the demands of a society that seems rooted in her exploitation. Conversely, John and Laura Taylor embody a systemic favorability that permits them to use and discard those lacking resources. In allegorically representing blackness, When the Bough Breaks employs black bodies as tools to discount racism in suggesting that blacks are as equally susceptible to racist positioning as whites. This suggestion implores viewers to conceptualize as individual not systemic. Ironically, in nurturing this belief, films like When the Bough Breaks and shows like Scandal cultivate the necessary unconsciousness for systemic racism to operate. Thus, what seems like another great time at the movies, permits black audiences to participate and foster their continued oppression in a country that thwarts enlightenment with entertainment.