If prompted to name three unfaithful people—most would name a black man. The hyper sexual black male, America’s phallic criminal, is a persistent image dominating past and present headlines.

Yes we have the Jude Laws, the Arnold Schwartzeneggers, the David Lettermans, and even the Bill Clintons, but black male infidelity from  Kobe Bryant back to civil rights revolutionary Dr. King, substantiates a fictive narrative of black male sexual deviancy.

In Race Matters, Dr. Cornell West offers the following articulation of how black sexuality functions distortedly in a global context:

The myth offers distorted, dehumanized creatures whose bodies—color of skin, shape of nose and lips, type of hair, size of hips—are already distinguished from the white norm of beauty and whose fearful sexual activities are deemed disgusting, dirty, or funky and considered less acceptable (West 120).

This narrative continues to consume black male identity, staining the beauty and allure of the African man with the necessary deficiencies to imply European superiority.

When Jeremy Meeks, the thirty something racially ambiguous man went viral in 2014, few anticipated his functionality in the black male narrative–partly because to many his race was questionable but his attractiveness was not. Prior to this viral photo, the name and face of “Jeremy Meeks” was only known to his family and friends. Now, Meeks has become a household name, known for his butter pecan complexion, light blue eyes and symmetrical jawline. Meeks went viral in 2014 after his mugshot was featured on social media. After a brief stint in prison, Meeks walked out of the penitentiary onto the runway. 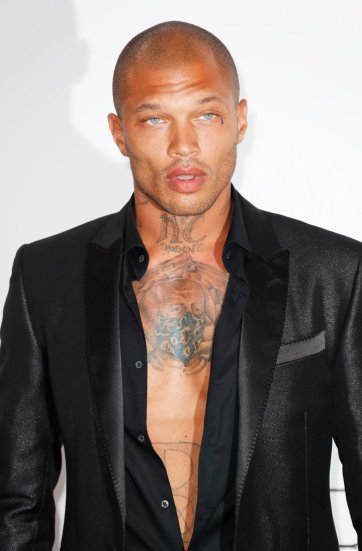 His story is what Americans love, a good metamorphosis tale that transports an individual from hand cuffs to cuff links, grit to glamour, or rags to riches. These stories collectively function to illustrating a false equity. The black blood running though Meek’s veins, however, makes his story yet another cautionary tale. The black body does not truly have upward mobility in America. Rather, the black body is merely handed different versions of slavery, transported from plantation to plantation and handed varied means to serve white people in their journey to consummate the height of systemic supremacy.

Meeks’ popularity, while seemingly a “win” for females who find pleasure in his appearance, exists to strengthen whiteness.

Meeks received initial publicity for two reasons. One, his blue eyes and light skin appeases Eurocentric beauty standards. Second, as a “mixed” of diluted African origin, he depicts the fictive criminality of the black man. The retweets and extended hype over Meeks festered a fixation with white aesthetics on black people and proved the “thug” caricature of black men pervasive in western culture.

Some may read this article and question my compartmentalizing Meeks as black. To this, I ask:

Would Meeks receive any attention if he was a white man with blue eyes arrested for gun possession?

Meek’s viral image illustrates his “beauty” as a product of white presence in black blood. This affords Meeks a redeeming quality worthy of a modeling contract, in grave contrast to the freed black bodies labeled “felons” who find it virtually impossible to find work. Conversely, Meek’s black blood, as perceived by the western gaze, stains his “good looks” with criminality, illustrating his white aesthetics or proximity to whiteness as tainted in its mixture with blackness and therefore destined to destitute behavior. 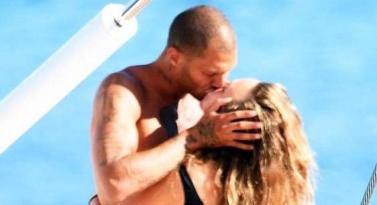 The media has recently expanded Meeks criminality with recent allegations of his wandering eyes. Namely, media attention has shifted from Meek’s modeling to his affair with rich, white billionaire Chloe Green. The image aligns Meeks with countless other philandering celebrities, depicting Meeks,  but as a black male, not only  breaking laws pertaining to firearm possession, but the contractual bounds of marriage as well. This news portrays Meeks as a recidivist, undeserving of the “second chance” afforded to him by white designers.

Meeks, however, was not handed a second chance. He was handed tokenism. In this pseudo opportunity Meeks aesthetics were systemically employed and issued visibility   to further disenfranchise the collective to which he attempted to sever ties with in his marriage to a white woman. Meeks body, raised and lynched by white media,  displays visibility as poison to anyone bearing black blood in their veins.

This white gaze, in both past and present settings,  holds us the black body in contempt.  This contempt is perhaps most evident in a term like “felon” that has become synonymous with blackness, namely black men. So when commenters state “He’s a felon what did you expect?” with regards to Meek’s recent scandal, they are actually expressing anticipation for crime and infidelity when speaking of any man possessing black blood. 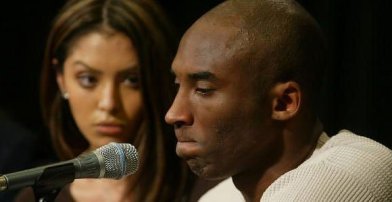 The black male cheater, from Eric Benet to now Jay Z, remains a consistent source of entertainment in western culture.

Painting the black man as a cheater substantiates age old claims of the male African poisoned by a prodigious “sword” incapable of taming by a fictive western civility. This dynamic in its consistency functions to justify the slaying and mistreatment of black males, deeming this recurring image fatally detrimental to the black collective.

So while praised for superior sexual genetics and “ability,” the white media remains dedicated to castrating the black man to discount the innate superiority of African kings.

Moreover, reproducing stories regarding black male infidelity via retweet or word of mouth extends the life of a fatal tumor designed to destroy the black body.

So while it’s tempting to indulge in the messiness of this story, as a collective is crucial to our advancement to consider how Meeks symbolically embodies our brothers, sons, husbands, friends, colleagues and loved ones lured to gallows by money and non-black women, destined to be the spoiled fruit on branches bent by the weight of their corpse.