Dr. Umar Johnson possesses an elevated ability to verbalize the significance of a collective in an individualistic world. 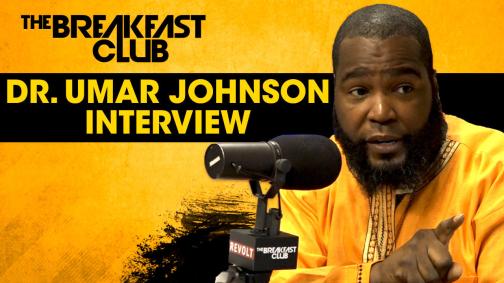 critical ideas typically deemed esoteric for colloquial settings. Most recently, Johnson appeared on the Power 105.1 Breakfast Club and News One with Roland Martin. His appearance has several strong moments—unveiling the black diaspora as  bearing. distorted perception and our popularized representatives as self-absorbed and small.

What he does well:

We must teach our children to have high self esteem
We must ensure that our purpose, as Nubian people, is rooted in elevating the     diaspora

The most resonant moment of Dr. Johnson’s interview with The Breakfast Club is the following statement:

“Love is a function of your values and your priorities”

Johnson’s words are a brilliant and pristine articulation of the ethical standards tho which all persons of African ancestry seeking consciousness must hold themselves. Love is not a matter of chance, and has little to do with external factors. Love, is an extension of self and reflection of our inner desires. As an oppressed people, who we love often represents who we are–which is an oppressed people, but can very well represent our potential and our majestic origins.

On News One, Johnson debates three blacks, two of which betrayed an ideology of whiteness—making their blackness solely physical. Johnson brilliantly inquired what whites have systemically implemented to end racism. The brilliance of this query surfaces in demanding proof of whites to alter a system to which they benefit. The panelists of course had no response, but they did bear an obvious contempt for Johnson—a black man who dared to make demands of any oppressor desiring ally status. Johnson’s query is one every black person should pose to every non black friend, associate, and colleague who seemingly “takes a stance” on black issues. If they do not tackle the system, they are merely putting on a show to veil racist and prejudice ideologies.

The panel, although unable to counter Johnson’s claims, remained adamant in disputing whites as sitting ducks in the festering of global racism. This debate was terribly hard to watch as it illustrated an inability of the mentally enslaved black to engage in “black” conversation that seemingly devalues whites—even if no whites are present. Watching this debate illustrated how the disenfranchised, placed in the panopticon of global racism, performs self-surveillance and self-censoring even when no whites are in the room.

Despite proving a seemingly strong representation of black consciousness, Johnson’s delivery exposes his enormous ego that overshadows his expression of a collective creed. Namely, Johnson’s consistent namedropping and overall pretentiousness betrays him as morally dwarfed due to a deeply embedded insecurity—an insecurity which mirrors our oppressors. Namely, Johnson seems as dedicated to delivering rhetoric of the Diaspora as he is about receiving credit. On The Breakfast Club he asserts himself as the first to say that a degree in African American studies is of little significance. As members of a collective, little thought is original or uninspired by an ancestor or elder, whether indirectly or directly. Entertaining being “first” deflects from rendering our narrative–which should the primary concern of anyone seeking to uphold and advance the black collective.  Also, as adamant as Johnson is about receiving credit, he is not as adamant about giving out credit. He makes several statements about black children that correspond to the teachings of our forefathers, namely Dr. Amos Wilson in his book The Psychology of the Black Child. Wilson, of course, was not mentioned in the interview.

His disposition prompts the query as to whether Johnson seeks to uplift the collective or himself. Johnson’s deposition also paints him in the image of his white oppressors, who are also violent in their receipt of credit and notably stingy in relinquishing credit. Furthermore, Johnson’s behavior is perhaps most detrimental not for its frivolousness but because it illustrates what the conscious community has witnessed for decades—the corruption of blacks by the desire to be white. It seems Dr. Johnson has used academia and his visibility not to advance blacks, but to push a personal agenda of consummating whiteness.

Similarly, on both The Breakfast Club and News One, Johnson referenced his familial affiliation to the great Frederick Douglas with the phrase “an ancestor of mine.” This statement proves hypocritical to his discourse on “collectiveness,” as this affiliation seems a means to heighten his significance through a blood relation to an instrumental  figure in the black narrative,

Frederick Douglass is a forefather of black studies. He, like many of the black men unknown to the larger collective, anchor blacks in the racial ideology that shapes our current lives. Douglas connects to us all, and Johnson’s consistent reference to Douglass appears an individualistic effort to appear superior through celebrity affiliation. Perhaps if Johnson shared a familial association with the late Dr. Amos Wilson, Johnson  would reference him as incessantly as he does ancestor Frederick Douglass.

Johnson’s behavior is quite detrimental. Now his seemingly elevated rhetoric rendered on popular platforms and local events,  appears an attempt to cure his insecurity–  unveiling Johnson as an individual preaching a collective agenda. As a result, his pedagogy appears insincere and ineffective.

This post does not seek to demean Mr. Johnson the individual, but does serve as means to state that we the black collective are better and deserve better than a representative that seeks to self-satisfy through pseudo radicalism. Yes, revolutions have often started with one individual taking a stand, but in order to birth true change, it cannot remain fixated on any individual.

So while many question Dr. Johnson’s credentials and the whereabouts of his degree-granting institions, I question his motives. Just as love reflects value, so do those one accepts as representatives or heroes. For this reason, while I can accept Dr. Johnson’s delivery and statements, and accept that there will not be another Fred Hampton, Medgar Evans, Dr. King, or Malcolm X, I cannot accept him as a representative of the conscious black community.

In short, it is not enough to say the right things. Johnson’s words are truthful and his delivery is resounding, but pretty words and thoughtful ambitions are not enough. To truly be an agent of change is to possess humility and to view your birth, acquired knowledge, and abilities as gateways to  purpose, not to attain visibility, money, or material items. The conscious representative will lead its constituency through the fire, whereas the pseudo conscious representative, in their blindness, leads their constituency to flames that will consume their flesh in a violent and wrathful rage, to the benefit of global oppressors who expend the black corpse lead to their deaths by a revolutionary in disguise.