Kidnap appears to be yet another action-adventure.suspense film starring a household name. Yet, Kidnap mirrors historical slave narrative in capturing the maternal stress of black mothers. Namely, much like Harriet Jacobs in The Incidents in the Life of a Slave Girl and Frederick’s Douglas’ mother who traveled by foot in the dark of night to see her son, Berry (Carla in the film) proves that she will stop at nothing to save her child. Therefore, black maternity is the portrait of conditional love, as this love strives to overcome a lifetime of hells and high waters.

To be a black mother is to struggle to be a parent, a provider and protector in a world where you are not even thought of as human. To be a black mother is to bear cyclical disenfranchisement as an individual and as a mother of offspring thrust into this system the moment they emerged from the black female womb. It is the sub-story, or what the film fails to verbally articulate that makes Kidnap worthy of conversation. The film itself is utterly unoriginal, lacks development, and performs in the contemporary pattern of colorblind-casting that visibly implements blackness but fails to acknowledge race beyond superficiality.

When the credits rolled, I found myself asking:

and waiting for that moment that would allot clarity to the previous ninety minutes.

This moment of clarity never came. But as I contemplated the film on the ride home, it occurred to me that while unintentional, this senseless ending was exactly the point. Black child abduction is senseless. In traditional and contemporary settings, the abducted black child occurred for no real reason, other than a means to exercise power. Enslaved black children were abducted by white settlers and transformed into laborers, and breeders for the white man’s plantation. Once transported to the states, children were often abducted from their mothers and sold like dogs to families seeking domestic servants and concubines. Contemporary black children continue to go missing, and if found their bodies are often hollowed out—their organs sold to what I’m sure is the highest bidder.

The film succeeds in deviating from the white savior 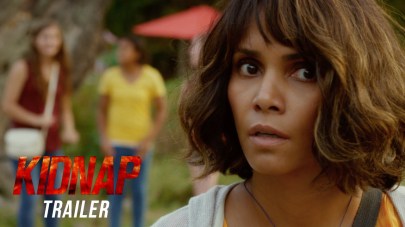 figure that dominates much of black portrayal. At the end of the film, Berry attempts to remove her child from a locked attic and a white man walks in pretending to be the neighbor. He puts on a convincing show, pretending to be surprised that his “neighbors” are child abductors. But it is his seemingly omniscient knowledge of the gender and quantity of the abducted children reveals that he is not a savior but a villain. This is probably the most suspenseful part of the film, and it functions because of the positive connotation of whiteness. Globally whites are viewed as a savior figures, despite direct and indirect evils that populate their history. In alleviating the white savior figure, the black woman emerges as her own hero— a depiction generally withheld from black female protagonists.
Accidental Hero

What is unstated and noteworthy in Kidnap’s portrayal of a black mother searching for her child, is that Berry becomes an accidental hero for two abducted white female children. Does my assertion suggest that the two white children do not deserve to be saved? Absolutely not. My assertion does function to state that far too often when working to elevate the black collective, blacks become accidental heroes to others who benefit from our efforts. For example, many of the shows and movies authored by black women to supposedly narrate the black experience, become opportunities for white actors and actresses, producers and artists, proving once again that nothing is done for blacks that does not benefit another demographic—whether directly or indirectly. 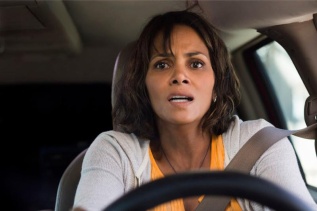 An image that dominates the film is Berry’s singularity. Namely, much of the film is Berry alone searching for her son. Interestingly, this solitary dynamic is also depicted when Berry does go to a police station for help. When Berry arrives, there is a single black woman answering the phones and managing the office. This depicts the black female body as habitually made to juggle with multiple responsibilities, with the systemic implication that she will drop one or two to her detriment.

Yet, a critic referenced Berry as a vehicle operating on “four flat tires,” overlooking that black motherhood is an imperfect solitary dynamic not intended to entertain the white male gaze. Separated from spouses and children as enslaved Africans, black motherhood began its tenure in this country as a complicated product of white evil. The contemporary environment is not much different, as the surging amount of black males incarcerated, dead, underemployed, or under-educated leaves many black women alone, and many black mothers inevitably single in one form or another.

Furthermore, although an imperfect film, Kindap is a perfect illustration of contemporary black motherhood as a nuanced manifestation of a historical dynamic plaguing the black collective. So despite figures like Michelle Obama, Maxine Waters, Kamala Harris, Beyonce, etc that seemingly symbolize black female potential, to the critical gaze, Kidnap illustrates the black woman as still fighting to save her children, her dignity, and her sanity from a systemized abduction orchestrated by white evil.