Tis been a rough weekend ( I will further divulge the details of this in a post I hope to have up by Wednesday the latest).

I purchase vegetable patties from a black-owned bakery near my home, and often have to park creatively in order to patronize this business and depart without colliding with other cars. On Saturday afternoon, I parked my car and as I turned off my air conditioning and assembled my belongings, a grey sedan pulls up and out jumps a young black man with who I perceive was his Asian girlfriend. They emerge from the vehicle and begin kissing while leaning on the trunk of the car. He is a chocolate brown and she is porcelain white with long dark hair. They kiss in-between her

puffs on a cigarette.

While certainly off-putting and inappropriate, these actions posed a collective disturbance in that it took place in the public-sphere of a predominately black neighborhood. A number of blacks walked by in this vulgar act between the two young people—  a public act of defacing blackness. The true violence in this behavior lies in the blatant fact that this dynamic  would have never occurred peacefully in Flushing, Bayside, or any of the other neighborhoods in Queens that are dominated by Asians and Whites. The young black boy used the pseudo safety of his community to engage in anti-black behavior an act reflective of the collective detrimental state that we are in presently.

This layers of this young man’s behavior implemented a deep upset that lingers in my bones three days later. I had a  similar feeling upon watching Sunday night’s episode of the HBO series Insecure.

If you have read any of my prior posts about the series Insecure, you know that I have had my share of conflict with the show. From the hyper sexualized black female bodies, to the oversimplified depiction of black “prejudice,” the series attempts to depict blackness by simply casting melanated actors. I consider myself to be very much like others in my collective, who although not in complete accordance with every depiction on the series, still support a black (ish) series (kind of) authored by a melanated woman.

This belief was viscously exposed to be false during last night’s episode. As confirmed by a twitter picture posted by Issa herself, Episode 4 Season 2 of Insecure was authored by a white woman.

The subject of the episode?

The sexual turn of the series follows Lawrence (Jay Ellis) encounter with a white cop for doing what countless other cars before him did to escape traffic—make a U-turn. This depiction reflects a white woman’s attempt to seem knowledgeable about the plights of black men. This attempt is of course provincial and adds no layers to the depictions to come.

Lawrence overlooks a similar compartmentalization of his black body by two seemingly friendly white women who pick up the tab when he misplaces his debit card. But this seemingly random act of kindness is neither random nor kind, as the two women solely wish to pay for Lawrence’s phallus. Small talk quickly turns to a threesome, to which the white women are disappointed in Lawrence’s sexual performance and begin plotting their next sexcapade with another black man before Lawrence has even dressed. This scene is a replica of the image in Jordan Peele’s Get Out, where the protagonist’s fictive girlfriend is already researching her next victim before the operation of her present victim was complete. 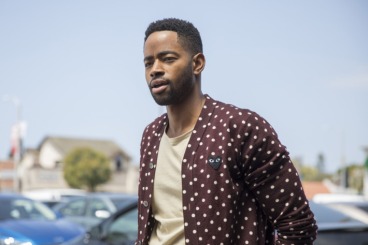 Both depictions depict the evilness of white female privilege, but also douse these evil bodies in a presumed desirability.

Up until this point, I believed that the target audience for this show was black women in their late twenties or early thirties. To this I say, depicting a graphic sex scene between a black man and two white woman is an assault on any conscious gaze, but is especially insulting to the black female gaze.

Although the episode eventually exposes the white women as coked out promiscuous women who “hunt” black men for an “elevated” sexual experience—the episode still paints white women as desirable and demonized solely for rejecting Lawrence—not for objectifying him. Had Lawrence performed to their liking, the episode would have bore a different connotation to most, but would betray the same black male hyper- sexualization as the depicted scenario.

The episode also fails to afford any depth to the black male/white woman relationships. Instead, Lawrence’s objectification and sexual rendezvous with these loose white women all appear a side effect of the sexual indecency Issa, a black woman.

Such superficiality is what is to be expected from a white female writer who even in her anti-racists attempts cannot be expected to not allot white females a collective compliment in her portrayal. But with my soul stirred and my eyes burned by the visual assault issued by a white female supremacists is far small for my journey to the prodigious state of consciousness. In short, while the series seems a means to explore the insecurities of being young, black, and unsure, it seems the series demands a level of insecurity from their viewers. An insecurity that the series will manipulate to ease with anti-black images and language.

Let me state that see this post does not function to portray a personal upset with  interracial sex or intimacy. I

would argue that anyone on a journey to consciousness is not bothered by the actions of individuals. Rather, individuals on a journey to consciousness are much more concerned about what these actions reveal about the collective. Seeing these depictions convey that we are in a collective state of confusion. The only means to counter this state would be for their to be a collective outage in response to such sightings, but as usual there are not enough angered by what should collectively disturb us.

This post also does not function to discount the reality of interracial relationships with the black collective. The conscious demand for pro-blackness calls for blacks to focus on blackness. By including whites in an attempt to compose our narrative in part or whole, whites cannot comment on blackness without including themselves. Thus, a predominately black show becomes gentrified in the white female need to for inclusion, and to prevent Insecure from being “too black” despite its HBO encasement and the fact that all its black characters speak the language of their oppressors.

Nevertheless, like the young man who likely drove his Asian girlfriend across Queens to have some very public private time, Issa’s success is largely based on those within the black community who view her series as pages in a shared narrative. Yet, rather than use the support from the black collective to implement pro-black images and dialogue, Issa extends an olive branch to a white woman and Insecure blossoms into a complete portrait of anti-blackness.

Now, tell me that ain’t insecure…