California Senator Maxine Waters made waves a few weeks ago with the phrase “reclaiming my time.” Waters had the floor at a House Financial Services Committee Hearing—a privilege Waters was unwilling to relinquish. Waters used her time to inquire why Treasury Secretary Steve Mnuchin failed to respond to her letter— a query he eschewed with an extensive and evasive response to which Waters responded with “reclaiming my time.” 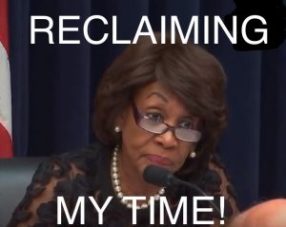 Similar battles for power accompany black leaders across the diaspora, who despite seemingly occupying positions of power, fight for their voices to be heard. Yes, after robbing the black collective of nearly every attribute of culture, the black body remains robbed of time as a strategic means to strip blacks of their esteem.

Water’s phrase “reclaiming my time,” although regarded as ignorance or immaturity by those who do not understand what scholar bell hooks labeled “racist-sexist oppression” is necessary for the black collective.

The art of reclaiming is a necessary addition to the daily lives of members of the black collective to combat the consistent deflection from our issues onto members of the white collective. Despite claiming to answer Waters’ query, Mnuchin sought to silence Waters by appropriating her time to speak as his own. This behavior mirrors the pattern of deflecting from black victimhood onto the white villain. 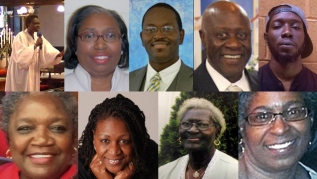 To explicate this point, let us consider the Charleston 9 and the recent act of racial terrorism in Charlottesville, Virginia.

Both attacks illustrated the depth of white evil in overt acts of racism cast onto the black collective. Yet, in both instances, the injured or murdered black bodies fade into the background as white villains dominate the spotlight. For this reason, I will intentionally omit both white villians’ name from this post. They have received far too much attention for mirroring the acts of their ancestors. In their heightened visibility, the white assailant emerges as the villain and victim. His attack is humanized by a “troubled” past, or “sudden lapse in judgement,” and the world is given reason to love this being sullied in white supremacy and deem the murdered inconvenient casualties that stain the memory of a otherwise “good” person in the bizarre “logic” that dominates much of the globe.

Despite whether any white person individually pulled the trigger, rammed their car into an unassuming crowd of people, or owned slaves, they benefit from every act of evil cast onto the black collective. Whites benefit from every freed murderer of a black men, women, or children, as this means that they too will be forgiven and returned to their families in time to enjoy dinner should they find themselves in a “bind” and need to kill a black person.

Up until this point, I have yet to hear of any other victim of the Charlottesville attacks aside from “Heather.” Although reports state that nineteen people were injured, I suppose they are less interesting because they are not young white women.

Similarly, the most known name with regard to the Charleston 9 is that of the murderer. This is anything but accidental, as oppressing blacks extends far beyond physical bludgeoning, disenfranchised schools, and gentrified neighborhoods. A crucial component to oppression is to maintain control over the oppressed’s history. White supremacists exercise control over the black collective through erasure. Blacks are continually told, whether implicitly or explicitly, that they are without history, or the right to be angry. We are constantly coerced into believing that we are in fact the problem, and the solution is whiteness. Yet in reclaiming our crimes, we understand that this method of control only functions in our ignorance. In reclaiming our crimes, blacks maintain their integrity and refuse to be their background in their narrative. In reclaiming our crimes, we refuse to even look at the pictures of the white villains, as their features are unremarkable and unworthy of a gaze better spent on the actual victims.

To reclaim our crimes, we assert our status as the bearers of the world’s biggest crime, and refuse to be criminalized by the invisibility issued by white supremacists who refuse to admit their faults.

To reclaim our crimes is stand beside the Charleston 9:

and the unnamed victims of the Charlottesville protest. In reclaiming our time, we afford a memory to the incalculable black victims cast throughout the diaspora disregarded in the indifference of white supremacy.

We may not be able to reclaim time already seized by white supremacists, but we can collectively reclaim the time we have left.