This week a man reduced to a number for the last nineteen years, received extensive coverage in lieu of obtaining a stay on his execution set to take place on Tuesday evening.

Due to new DNA evidence, there is now reasonable doubt cast in Williams’ murder conviction and for the time being, the Missouri governor has halted his execution.

The stories regarding Williams’ alleviated death sentence function to depict the legal system as changing for the better, casually disregarding the time this young man has lost in his imprisonment for a crime in need of a criminal. This case was never about Williams the man, and it still is not—he is merely a pawn, an individual exploited to divert from a collective issue of wrongful imprisonment and cold-blooded murder of black bodies.

Williams symbolically represents a contemporary consternation, mirroring the unspeakable evil documented in Ida B Wells’ Southern Horrors. Wells’ brilliant journalism captures the brutal and inhumane deaths of countless men, women, and children of whom she dignifies with names and a backstory—attributes purposefully omitted from their western portrayal which has long forgotten the spilled blood of our ancestors.

Marcellus Williams proves eerily similar to the cases of CJ Miller and John Denmark, two black men who like Williams faced capital penalty for allegedly committing crimes against white women—a conviction reached with no evidence. Miller, who Wells regards as “absolutely innocent,” met a horrific end despite his innocence. She writes:

“They insisted that, as they were not sure he was the right man, they would compromise the matter by hanging him instead of burning. Not to be outdone, they took the body down and made a huge bonfire of it.” (Wells 207)

John Denmark of Denmark, South Carolina faced charged of rape. He too imbued conviction without evidence, yet still paid for someone else’s crime with his life. Wells documented the tragedy as follows:

“The crime has ben committed and somebody had to hang for it, and if he Peterson was not guilty of that he was guilty of some other crime.”

Although  documented by Wells  in the early nineteenth century, they reflect the fate handed to many black men throughout the globe. The phrase “a crime had been committed and somebody had to hang for it,” encapsulates the sentiments that incriminate the black body time and time again. Crimes indeed happen daily throughout the globe. Yet the true criminals enjoy labels like teacher, governor, financier, and business owner, whereas those born with melanin imbue criminality instantaneously due to the hue of their bodies. 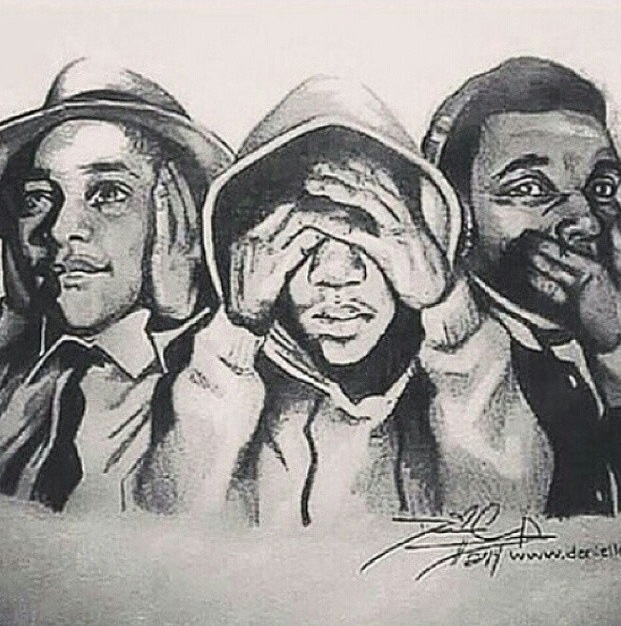 However, if every black person born from from this day forward committed a so= called crime for the next century, it could never outdo the level of inhumanity implemented by whites over the last four hundred years. Let us remember that the devilish murderers of Emmett Till, like the murderers of Trayvon Martin, Mike Brown, Tamir Rice, John Crawford III, and Lennon Lacy remain free despite insurmountable evidence. Whereas, young men like Marcellus Wallace, like the Central Park 5 and so many other black men are locked away unjustly for crimes they did not commit.

Author Ta-nehisi Coates discussed the state of the black body in Between the World and Me, with the following:

“You cannot forget how much they took from us, and how they transfigured our very bodies into sugar, tobacco, cotton, and gold.”

Whites use their language, their laws, and their control of the media to caricature the black body into America’s criminal. As a result, to be black is to navigate your body in a suspended state, in which whites puppeteer through an exploited fear. The insurmountable amount of blacks on death row, function to induce a bizarre fearful gratitude in which the oppressed are grateful in their pseudo distance from death row, but fearful in their interchangeability with the blacks on death row, or those incarcerated for the white man’s burden.

Yet news of Williams’ stay functions to illustrate the system as forgivable. Although Williams is one man, the conscious collective understands that Williams was incarcerated symbolically, Meaning, his body like the multitudes of black men throughout the centuries, endures a coerced penalty for the averted crimes of white men. A truth that betrays an exolted a system as unforgivably soured by white supremacy— its humanity and credibility irretrievable to a collective poisoned by its cruelty for centuries.

In Discipline and Punish Foucault delineates the role of penalty in explicating societal consequence. He writes:

The teacher must avoid, as far as possible, the use of punishment; on the contrary, he must endeavor to make rewards more frequent than penalties, the lazy being more encouraged by the desire to be rewarded in the same way as the diligent than by the fear of punishment” (Foucault 180)

They teacher in these instances is of course  those of the majority who reside at the top of our systemic hierarchy. The punishment inflicted by our societal teachers, functions to deepen the internalization of white superiority—deeming black consequence a reward for whites. So, while blacks live in a state of suspended fear, whites enjoy an oppositional sentiment.

It is also imperative that the black collective not forget about Troy Davis, a black man

executed in 2011 for allegedly murdering an off-duty  police officer. He was sentenced to death despite the absence of a murder weapon, his life taken and body placed beneath a ground he was unable to walk on freely for over two decades prior to his death.

The judicial system, reflective of its creators, is inherently racist. But, as Coates states

“And the word racist, to them, conjures, if not a tobacco-spitting oak, then something just as fantastic—an ore, troll, or gorgon.”

The word “racist”does not function properly to a collective emotionally stunted by white supremacy. Rather, the global gaze paints whites as magicians that can make black life disappear with falsified charges and a corrupt legal system. The judicial system functions to illustrate the black body as disposable and subject to legal systemic abjection.

So while this victory, if you wish to call it that,  is a small one for the individual, it must not be overlooked that it took DNA to temporarily free a black man from death, but evidence and a confession is often not enough to put away white murderers. Let us also not forget that Troy Davis also received a stay, but was eventually unable to dodge the white need to seize the body of another black soul. .

Davis, Williams and the plentiful black men listed in Wells’ journalistic archive, illustrate the black body as a canvass for western error—labeled criminals by those bearing a criminal past and present. 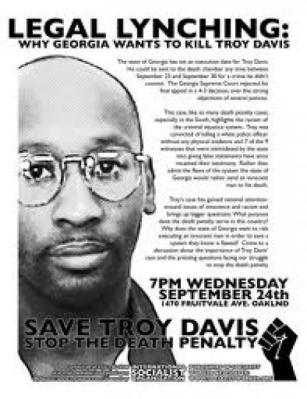 Blacks remain overwhelming incarcerated, murdered and instantaneously criminalized by a system where whites play the god they handed to Abducted Africans centuries ago– taking lives they didn’t give–seizing bodies mangled by white oppression.

Yet, as Ta-nehisi Coates wrote:

“…America understands itself as God’s handiwork, but the black body is the clearest evidence that America is the work of men.”

I say this statement grudgingly and not with an ounce of pride–blacks are America.  Blacks are the red, white, and blue of this stolen land.

Whether footage from a black body murdered by the police that goes viral, or a black man issued capital punishment, the black body is a consistent victim of legal racial terrorism.  If this does not illustrate how the legal system is designed to fail us as Black people, I am unsure what does. If this does not solidify the status of Black death and destruction as a public spectacle, with the intent to dwarf our collective to a state of cowardice, I am unsure what will.

May Marcellus Williams, make us remember not only CJ Miller, John Denmark, and Troy Davis, but all the black bodies systemically wounded by a country that murders blacks for sport. May they remind us that we are not free, but bound to the lethal injection seat, or the literal and figurative stake to which too many of our kinfolk have taken their last breaths.