as smooth as his chocolate skin. His recent speech following winning a white supremmy begs the question whether black love can ever be a product of white creation. The answer is of course no.

On NBC series This Is Us, a series praised for its ability to master the white savior role, Brown’s role is essential. Brown plays Randall the adopted black child of a young white couple. This role is the crux of the white savior theme that anchors the series. Without Brown the series not only loses its token, but it’s ticket to illustrating the pseudo beauty of white people, prompting the masses to forget the disservice whites do to blacks as their educators,  police officers, e.t.c.–a disservice that displays whites as lacking the ingenuity and cultural cognizance necessary to raise a strong black man or woman. 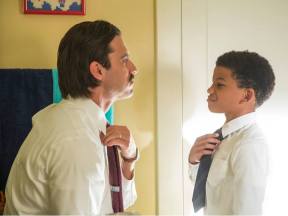 Nevertheless, Brown had to win for his role. It’s interesting because Brown’s acceptance speech seems to imply that he is playing a black man. No, Brown is playing a veil that masks white supremacy with the implied kindness of making a black body visible on a white series and network.  Brown is employed to ensure that whites remain comforted and proud in their whiteness. He’s the crossover sound that plays loudly (like the music played when Brown overstayed his welcome on the whitesupremmy stage)  over the prose of black consciousness. 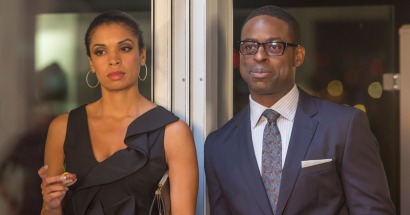 So when Brown speaks of being proud to portray “black love,” while it sounds good coming from a black man, it is also quite disturbing.

Let us not overlook the recurring image of the darker black man with a significantly lighter spouse that dominates nearly every portrayal of “black love” except Love Jones (1997) and Two Can Play That Game (2001), an image that illustrates the relationship between Randall and his his wife Beth ( Susan Kelechi Watson) on This Is Us as generic not groundbreaking.

The “black” union featured on the show produces two little girls, so while seemingly 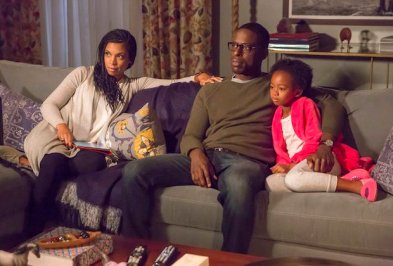 featuring black love and black parenting, the series omits the raising of black men by black people. This implies that not only are whites responsible for creating a conventionally successful black man, but in cultivating a “proper” husband for the black woman. This of course ignores the unsettling yet intentional reality that for all intensive purposes Randall, a man denied access to his blackness by this white adopted parents,  is for all intensive purposes a white man with black skin

As a union conjured by white authors to seem liberal and diverse, Randall and Beth of This Is Us is not black love. To paraphrase what Dr. Cornell West asserts about Black love in Race Matters, black love exists autonomously from whitenesss. Black love is for blacks, by blacks, and between blacks–no exceptions.

All imitations are like candy, they may look or taste good after dinner or even as an evening snack, but it is not good for us individually or as a collective.

I hope you stick around.

But I hope that loud music was enough to show you how the white supremmy’s get down.

For when Kanye “interrupted” Taylor it went viral,

but when they cut you off, social media was hardly in a spiral…