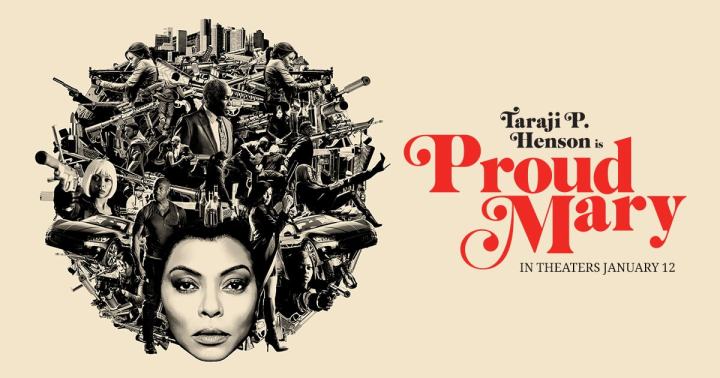 Proud Mary (2018) is a tale of emancipation well carried by Taraji P. Henson (Mary), Billy Brown (Tom), and Danny Glover (Benny), but poorly written and developed by the non-black males behind the scenes. Mary (Taraji P. Henson) a long time affiliate of Benny (Danny Glover), works to free herself from the chains of a life she no longer desires— at least on the surface. Named for the famed Ike and Turner song, Proud Mary reflects a fetishizing of the black female form reminiscent of

Released in 1969, Tina Turner’s performance of Proud Mary resurrected the animalistic prototype of the black female form displaced onto Saartje Bartmaan during the 1700s. In performance, the song proud Mary depicts what viewers see in blaxploitation films like Coffy and Foxy Brown (Pam Grier), where

the black female form displays a heightened sexuality intertwined with an underscored masculinity mirroring the perception of the enslaved black Woman.

Though not revealing her body, Henson’s resurrection of the proud Mary form resumes the paradoxical displacement of a masculine hyper-sexuality onto the black female form.

Before I go on any further in my review, please allow me to state that my qualms are not
with any of the black actors, at least in terms of their performance. My issue is with the seemingly complimentary image that purports very damaging behavior.

My comparison between Proud Mary and the black female superhero of the 1970s is easily disputed by claims that Mary is not hyper-sexualized— and overtly she is not. There is no sex scene, no shower scene or even a kiss. In fact, the biggest romance in the film is the maternal bond between Mary and Danny. Though refreshing, I can not help but wonder if this omitted  love scene stems from an anxiety in depicting black love in a contemporary climate inundated with interracial love, or a desire to somehow a-sexualize a black female who spends most the movie with a phallus in hand.

Nevertheless, Mary’s espousal to a big black gun, simultaneously masculinizes and sexualizes the black female form.
Particularly, the immaculate gun-slinging displayed by Mary in this film proves eerily similar to Idris Elba’s performance in The Dark Tower, where his coital relationship with his gun bring about change. Mary’s gun-slinging overtly sexualizes Henson simultaneously masculinizing her. Particularly, the precise phallic handling that dominates the film paints the black female form as not a lady with a gun but a female with a supplemental phallus. Thus, the film’s depiction of the strong black woman, seemingly occurs at the expense of blurring the gender line between the black male and female form, prompting viewers to question whether the black female form is less than a man but more than a woman–or vice versa.

throughout the global perception of the black female form. Proud Mary, the strong black woman that anchors the film, is literally a super woman. Yet, true to the treatment of the black female form, she is underestimated.  Proud Mary as an underestimated entity is depicted in Benny’s inability to conceive Mary as going against his commands. Her loyalty is also taken for granted—illustrated in Benny and Tom’s assumption that there is nothing Mary would rather do with her life than fulfill their personal and professionals needs. The black female form as an underestimated being whose loyalty is taken for granted, gives way for a central component of Proud Mary’s embodiment of the strong black woman caricature–the elimination and/or emasculation of the black man.

In accordance with the strong black woman caricature, the film depicts Mary as not needing a man, but being needed by men.

Viewers see Mary emasculate Tom in refusing his desire to make their romantic past present— a refusal that ultimately results in Tom’s elimination. In the film’s final scene, Mary has murdered her surrogate father Benny, and their entire team. Tom has taken Danny hostage, and Mary has come to collect her surrogate son. She attempts to do so without harming Tom. But once Mary walks away without looking back, a distressed Tom shoots at Mary. She of course shoots back, but wounding Tom is not enough. She walks a few feet over to an ailing Tom and shoots Tom at point blank range. In a movie full of murder, I found this image to be the most hurtful. The hurt lies in the implication that liberation for the strong black woman comes solely in murdering the black man.

I would be remiss if I did not mention that although I use the term “black” to describe the characters—their is no mention of race. There is also a noticeable dearth of white

women— aside from a single white female sales clerk in a high-end department store.

Both occurrences are hardly coincidental and work together to depict a central component of the film. Despite Taraji’s starring role in the film and embodiment of the strong black woman caricature—her function is to embody “woman—“ the black actors employed to capitalize on the black consumer. Just as Pequita Burgess–a black woman– was the face of Bill O’Reilly’s “downfall” Taraji is the face of the oppositional gaze’s attempt of modernity in depicting a black “feminist” figure as a step away from the overt racism that pollutes our contemporary climate. The conscious gaze knows that it is racism that purports strong images of black women either in close proximity to whiteness, or at the expense of the emasculated (via absence or action) black male. Moreover, it appears that Mary exists as a “woman” figure that must break away from blackness, blackness as embodied through black males Benny and Tom, in order to consummate her journey to woman. Mary- a woman who ran away from the bad, only to be found by the worse, seeks to free herself from “blackness” via her supplementary phallus to emerge as woman.

The love affair that carries the film is the love between Mary and Danny. After tailing

Danny and taking him in after he collapses on a Boston street, the two organically fall into a mother and son role. It is this maternal role that seemingly is the cherry on Mary’s attempt to emerge as woman, simultaneously evoking the central maternal image in the Christian Bible. Specifically, the name Mary evokes the biblical mother of Christ who conceives the savior of humanity immaculately. Mary, (Henson) performs a similar function in emerging as mother to a child she did not conventionally conceive. The placement of “proud” in front of “mary” functions to depict the black mother Mary as possessing one of the seven sins–pride. This evokes a similar image to eve and the apple, the black woman depicted as possessing the pride that sullies humanity with her sin and thwarts her journey to “woman.” 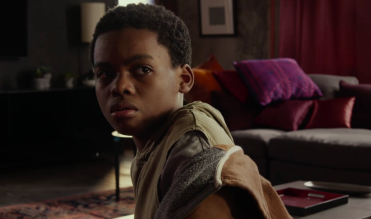 Before I conclude this piece, I wish to share that this film had me at the edge of my seat for an unlikely reason. I spent the bulk of the film hoping that Danny (Jahi Di’allo Winston) did not get shot. Danny is easily comparable to Trayvon Martin, or even a Tamir Rice who were murdered at or around Danny’s age in the film—their transitions induced by gunshot wounds. Though “saved” by black mother Mary, Danny’s spared life almost suckers viewers into enjoying a mediocre movie more because although inundated with death–the movie spares the child.  The spared black male child is especially resonant given the inhumane amount of young black bodies the black collective has had to bury over the last four hundred years. This bothered me as it seems a ploy of the non-black writer and directors to exploit the contemporary gaze fixated on the fiction that racism is an isolated ideology–whereas if there was no racism this movie and the caricatures that cloud it, would not exist.  Furthermore, the spared black child makes viewers more inclined to develop an underserving predilection for the non-black movie producers and writers for not disrupting a route to escapism with reality–unveiling the film as a means of escapism, not a means to exhale. 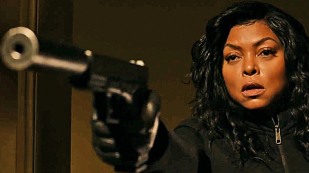 Though surfacely filling a void in Black female representation on the big screen, Proud Mary reinforces negative controlling images that continue to surround and drown the black female body in perspectives that function to substantiate black female disenfranchisement.

So while seemingly an ode to black female physical and mental strength, Proud Mary subversively sexualizes the black female form, proving that objectivity from the oppositional gaze is simply not feasible in a world to which her subjugation remains a necessity.