Comedian Gary Owens recently made headlines for using his black wife to call another black man the n-word in a battle I admit I had no idea was taking place before this act of debauchery made its way onto my twitter timeline. I’ll be honest, I am not a fan of Gary Owen, and think he is just another below average white man afforded fame and fortune because of his hue. Because of these sentiments, it is impossible for Mr. Owens to do or say anything that will deviate from my expectations. I do not see myself as an anomaly in this case—I am pretty sure that the expectations of Mr. Owens remain virtually non-existent—yet is act provides a mean to afford Owens extended exposure and to foment a performative outrage ubiquitous in contemporary treatment of disrespect towards black people.

My critique then is to the outraged who played a vital role in this man’s relevancy and confidence to act as he did. The same faction who had little to no objection to Owens’ presence in Think Like a Man, and tuned into his BET show-created a platform for this cultural leech. In both Think Like A Man and his reality show, Owens occupied a space that could have been used for a black body collectively call the black collective the n word. In both examples, Owens used the black female body as a canvass for his own visibility.

The film adaptation of Steve Harvey’s book Think Like a Man, speaks to a generation of single women paralyzed by an oblivion to their own power. The book, like the movie, targets the black woman, romantically crippled by a society that murders or emasculates their male counterparts. Just as Owens’ marriage to his beautiful black wife affords him clout or proximity to blackness by way of a platform, the figurative and literal black female body in Think Like A Man, in audience and casting, is a pedestal to which Owens stands in his feature.

Owens personifies the white who exists at the bottom of white society who forges an increased proximity to blacks as a way to access the pseudo superiority whites have been conditioned to expect from life. If this sounds familiar, it should. A few years ago, performative outage erupted when average white woman Rachel Dolezal was outed as pursuing an above average life as a black woman. While criticized and parodied numerous times, Dolezal was most violent in the assumed singularity of her actions– a singularity that veils similar acts of employing the black body as a pedestal to a better life as a white person  just as (if not moreso) demeaning and dangerous to the black collective.

Though the term “by any means necessary” is aligned with black nationalism and black power movements, it is essential for blacks to acknowledge and understand that whites strive to attain their mythical superiority by the same means. All blacks have encountered Gary Owens type figures who veil their white supremacy with a smile or seemingly easygoing demeanor—-but are master deceivers who know all too well how to play their cards.

Most importantly, Owens illustrates that the detriment is not being called the n-word, but being treating as one. By existing, or should I say “starring” in this space, Owens niggerizes he entire black collective in occupying a space that should have been reserved for blacks. His act of deception functions to niggerize an already systemized audience who laughs at the “comedic” lynching Owens’ placement in the spotlight engenders to the black collective.  Particularly, the comedic lens  functions deceptively in mitigating actions that have “gone to far” as a merely a “bad” joke. This “comedic” lens, therefore, illustrates the height of deception mastery– the violent veil of laughter. 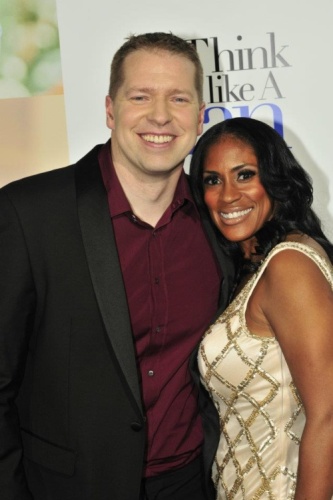 In his ability to deceive the systemically disenfranchised, Owens has tricked many into thinking this is his first offense.  In employing his wife as the actor in a conspicuously offensive action, Owens deflects from his master deception simultaneously exposing the strategy for his espousal. Women and men who contractually bound themselves to non-blacks inevitably play in life, a role that Kenya (Owen’s wife) plays in the video. They are the canvass to which the white spouse casts their sins—a built in binary opposite–a bridge to capital. Let us not forget Owens’ degrading inclusion of his wife’s past sexual encounters with black men into “comedy” tours that span the United States. So whether Kenya Owens verbally called comedian Michael Blackson the n-word, or stood silently beside a white man who silently but violently attacks the black collective with white supremacist ambitions—she is in essence, in existence, in positionally, calling the black man-, calling black people,  the “n -word” while personifying her own systemized status. 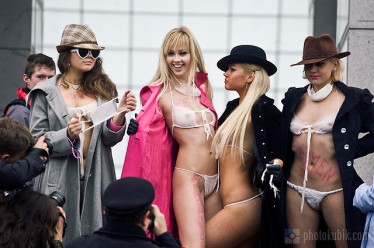 similar function with their display outside of Actor, Writer, Comedian, Philanthropist Bill Cosby’s trial. Over the last thirty-six hours, there have been multiple pictures of Nicolle Rochelle–former guest star on the Cosby show, topless and fervently rushing Bill Cosby as he made his way to trial. The images portray the beautiful black woman in a savagely manner, the word savage specifically used here to reference the feral state to which feminism reduces the black body. It is not an accident that the featured protester was a black woman resembling a young Angela Davis, but the majority of alleged victims are white.

FEMEN, an organization started in the UK, is inundated with white female bodies and therefore is inevitably anchored in white female interests.  FEMEN, like every other “wave” of feminism, solicits black female bodies as props for a pseudo universality used to veil their overt racism. If it were not for black demonstrators, these white female supremacists could not master their deceptive suggestion that it is “all women who are mad,” when it is white women, or feminists, who are happy to resume to denigration of the black man exhibited by foremothers Susan B. Anthony and Elizabeth Cady Stanton. In Race, Gender, Class, activist and scholar Angela Davis presents a formidable platform for understanding just how racist revered leaders Cady Stanton and Anthony were, and how their views on black bodies and “remedying” what they deem black inferiority, mirrored that of their male counterparts.

Yet in calling out these anti-black sins, I want to be cautious in ensuring that my criticism is not without care. I understand that many attribute anti-black actions to be one of choice—-I do not. Anti-blackness is a choice made for black people, by white supremacists who eschew responsibility for their evil in articulating anti-blackness as a reflection of black self-hatred. To this I vehemently refute. Self-hatred requires a “Self,” which is something in which the black community has been thoroughly deprived. It is this underdeveloped self that allows for those within the black collective to pseudo identify with master deceivers like Gary Owens and feminists– to believe in a commonality that simply does not exists.

To counter deception mastery, we as a collective must engender what I call black-

building, or the production of a black identity that has never been fully developed or given a chance to permeate our systemically fractured minds. These identities need not be identical, but in essence must be rooted in a pro-blackness that weaves together the details of our lives that without care, can function to separate us.

Master deceivers disrupt the ability of blacks to exist in peace, but in collective shaping of our identity—we as a people can ensure that blackness exists in and through us–extinguishing white evil with an incomparable black identity, pride, and over-standing.

****A special that you to BlackEmpowerment for introducing me to the teachings of Neely Fuller, whose scholarship greatly aided the terminology (namely, “master deceiver”) used in this post.