Scandal (Shonda Rhimes; 2012), the series who for the first time placed a black woman in a leading role since 1974’s Get Christie Love—will go down in history for its seemingly groundbreaking representation of black femininity. Pope, the beautiful, intelligent, and confident series lead is seen to personify fearlessness, but actualizes the most socially accepted form of fear—conventional success. Pope is literally and figuratively the black girl who wears white—-the black female who consummates her journey to woman by her entry into white spaces. But despite her costly wardrobe and masterful silk press, Pope still enters through the illusive back door as a servant.

This point is eloquently articulated and countered by Eli “Rowan” Pope, who is the sole redeemable character of the series—redeemable in part not whole. Pope personifies the strong black male character in words, his skill of murder and mimesis of white supremacist violence maintains the very republic established in the blood of the ancestors. So while not directly answering to whites in power, Pope answers to the invisibility of white supremacy who through the hypnosis of niggerization, invites his mimesis and fervent protection of a country founded in his status as cargo. But even with his truth, one cannot deny that Pope ability to masterfully “talk that talk.” Pope, in singularity satiates the apex of the series’ writing and delivery, and while not black conscious in action—Pope is the pseudo revolutionary that can exist with comfort on prime-time television.

Nevertheless, Pope’s exit marks the end of an era—namely the conclusion of the central “black” woman, simultaneously marking the beginning of the era she was resurrected to engender. The black leading ladies of prime time television have already began to fade to black—evidenced by the cancellation of BET series Being Mary Jane, a series which debuted in 2013 that featured black actress Gabrielle Union as a black female lead.

History will remember Pope as the black female body who powerfully held the door open for her sisters, Mary Jane Paul (Being Mary Jane), Annalise Keating (How to Get Away With Murder), amongst other black female characters that rose to prominence as professional by day and mistresses by night. Pope, however,  isn’t powerful or groundbreaking, she is predictable. Popularized during the “hope” era of the Obama administration, Pope’s sole purpose was to engender predictability in action or appreciation amongst the masses. Pope lured black women into the lions den of feminism, behind the mask of a controlling image that is a medley of past tropes: mammy, jezebel, sapphire and the white male infatuation typically aligned with the tragic mulatto.  Thus, it is merely symbolic that Pope is going anywhere, as the white Woman she paved the way for in her masterful portrayal of inspirational intersectional agent, is happily existing at the cusp of a supremacy that issues the same old oppression under new management.

As an intersectional agent, Olivia Pope also played a prominent role in sensationalizing black female-white male romantic unions. Despite referencing the Sally Hemmings/Thomas Jefferson feel of their union, the series romanticizes the relations between a powerful white man and his black servant. Olitz, the level attached to fans of the interracial romance, illustrates the success of the collective amnesia the series imbues— and the (not so) hidden desire of many melanated women to exist in whiteness.

As Franz Fanon writes in Black Skin, White Masks “she was not the girl wanting to be white—she was white.” This is the image that Scandal seeks to present as viewers are left with Olivia Pope walking away from the white house in a white trench coat, when a white man (Fitzgerald Grant III, Tony Goldwyn) pulls up in a black car and greets her. While seemingly a cliff hanger, viewers need not know the particulars. Despite suggesting that Pope’s white house departure is a stride toward freedom, Pope is without uncertainty taking significant strides towards whiteness, where she actually sees herself as a white person despite her location inside a black body—illustrating the height to contemporary enslavement

Pope covertly teaches the black female gaze that just because someone looks like you, does not mean they are you–or that they are with you. Blackness is just something Pope possesses by way of her melanin, but was merely incidental in her feature on an otherwise predominately white show. This truth exposes Shonda Rhimes as not only working for white people, in the sense that she produces content for a white network, but that she produced significant opportunities for the most privileged demographic in the world. So in featuring series villain Cyrus Beene (Jeff Perry) lie, cheat, steal, and murder to claim access to the Oval office, viewers are entertained by the very politics that make the world go round, the politics that legalized the rape of our foremothers and the emasculation of our forefathers, that presented a black female body in a pretty package to mollify the ugliness that enabled her being. 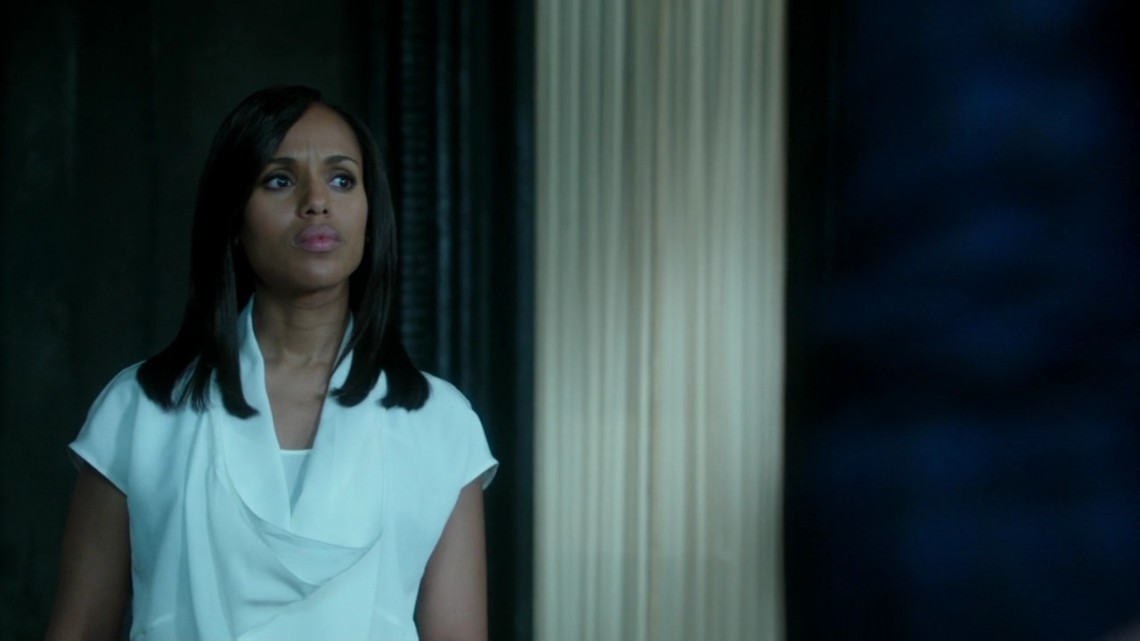 To that, all I can say that this contemporary “wave” of feminism simply would not be what it is without the contributions of women like Shonda Rhimes, and characters like Olivia Pope. So the truth “scandal” is one of psuedo representation, as all this series succeeded in re presenting what the variants of white male and female supremacy narrated by a melanated woman.

Scandal ends its series finale with Olivia Pope’s  painting on a Mount Rushmore-like setting — an image that alludes to an image painted a few scenes prior with Eli Pope’s “read” to a panel of white men– consummating Olivia Pope’s  ambitions to exist alongside those she spent her entire career lifting up. The series of course paints this feature as a victory, Pope painted similarly to the late Dido Belle, but as the main attraction. Though, Pope’s feature is compatible with featuring the notepad on which a novelist wrote a best seller—a token deemed significant solely in its product. Pope, in portrayal and invention, whether featured in an art exhibit or on the news, is merely a prop, primped and shined for the viewing pleasure of one of two demographics:

The first point is epitomized by two young girls smiling as they look up to this painting of Olivia Pope with a white top, her hair curly, her skin brown, and her green maxi skirt presenting her as a form of mermaid who swims from blackness to whiteness—a reality veiled from the referenced image but ever present in her placement in a display alongside white men and women of position. For me, the image presents a different image. The image suggests that no matter where you are in life, or what you do, there is always someone looking up to you. These someones are not always those that you see, but those who see you—and encompass your being as a portrait of their reality and possibilities. In seeing these young girls look up to  Olivia Pope and feel empowered by her symbolism, as we saw so many black families take in the Obamas literally placing them in their homes, the true scandal is the violent symbolism the black community is consistently bamboozled into accepted as a form of reparations.

So I could say I am happy Scandal is gone or that I wish it had never debuted, knowing that something and someone else would have occupied this place in time designated to recruiting the black viewer into intersectional agent, inviting the black body to step over the dead bodies of our brethren and join forces with the collective who pulled the trigger. The “scandal” of black exploitation and mutilation ever-present and resurrected periodically in media, function to ensure a wound created four hundred years ago never heals, and that the black collective keeps masking infection with deflection vexingly called “entertainment.”