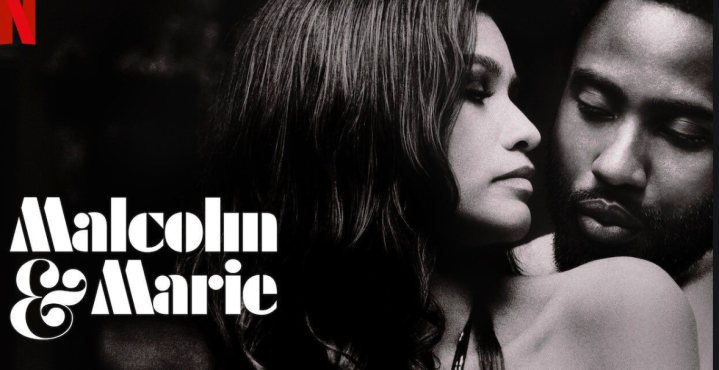 Malcolm and Marie (2021) is the latest portrait of a white director and writer implementing universality behind the ruse of diversity, or what I call cinematic blackface.

We encounter the couple after Malcolm’s (John David Washington) directorial debut. Marie (Zendaya) is overtly upset; an emotion made conspicuous as she smokes and makes Malcolm (unbaked) Mac and cheese.

The reason? Viewers eventually learn that Marie is upset because Malcolm forgot to thank her. Thus, the larger narrative of this visual text becomes one of gender and gratitude.

The film exhausts the topic with an extensive dialogue that reveals Marie as struggling with substance abuse in her past, her turbulent path to overcome her addictions, and her actress ambitions. There is also some contention between whether Marie’s life inspired the film and over Malcolm’s decision not to cast her.

The uncasted figure of inspiration. The thankless job of an unacknowledged muse.

If this description sounds familiar, it because it is familiar.

The uncasted figure of inspiration is the black woman.

The thankless job of an unacknowledged muse is the trajectory of the being of black female form.

She, the black woman, is, who the visual text alludes to. Still, the text employs said experience to intensify the gender conversation and strengthen the plight to implement white female supremacy.

Sam Levinson’s project, however, elucidates that social strides toward white female supremacy are also another means for white men to actualize their supremacy as well.

Casting actress Zendaya as the film’s lead conveys the symbolic bridge between the black and white female experience. Specifically, the film regards the thankless muse and the uncasted figure as a shared experience among women.

This, of course, could not be more untrue.

Like countless other examples that precedes it, the film elucidates that the being of black female form cannot even be the face of her own narrative.

What’s most upsetting here is the irresponsible yet socially convenient casting of black bodies to actualize anti-black objectives, or, as the lateDr. Amos Wilson called it, black faces of white power. By casting a biracial and racially ambiguous lead, the film invites the African-adjacent into a narrative exclusive to and idiosyncratic to the black woman.

Additionally, the film places the heterosexual black man as he appears in the social media realm, tarred and feathered by accusations and assumptions that are truest when applied to their non-black counterparts, a pairing many remain too afraid to articulate or entertain.

My words are not to censure the biracial woman. Rather, my words are to highlight how biraciality becomes weaponized in white actualization of veiled white nationalism.

Furthermore, the movie, as yet another hegemonic production, proves disappointing but not surprising, and Malcolm & Marie and its hidden agenda illuminate that the layers of systemic programming are far more sinister and layered than they appear.

4 thoughts on “Malcolm, Marie, and A Hidden Agenda Makes Three”